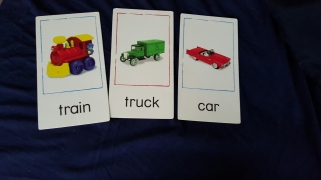 These three cards… Not just any 3 cards. Let me tell you a little story about them. My coworker brought in some flashcards for my son, since we had the discussion about the PECS program. I tried to introduce them to my son and seemed to want no parts in this. So I took it upon myself to get out the cards I can match to his favorite toys. Which are anything with wheels. I started out with 4 cards, the fourth being his favorite a fire truck. I placed the respective toys with the picture and showed him which pictures they went with. I did this for about an hour, as I said the names he begin to flip the cards over. On the back it had how to pronounce each words also how to introduce them in a sentence. When he flipped them, I said what they were. At times he waited for me to say what it was before he flipped them and vice versa. We did this for almost 2 hours. After while, he was over it.

Well last night after dumping out his cards all over the floor he looked through then and found these 3. I suspected that he couldn’t find the fire truck so he handed me these. I smiled because in my heart, I felt that he did learn them from that one night and he was interested in playing that game again.

I know it seems like baby steps, but to me that meant he was paying attention and remember what I had taught him. This morning, I found him looking at these three for long periods of time. I think we will work on them again tonight. Now if I get him to try to say them.