Have you ever had a discussion with a person and realized that no matter how things are going it a waste of energy?

Sometimes when having a debate/conversation with people we have to take your feeling out of the equation. I get that sometimes we can be very passionate about the topic of discussion. But when it becomes a shouting match or things like that, that’s when you have to realize you are taking things personal and to another level. Last night we saw that during the 1st Presidential Debate.

Personally, I don’t like to share my opinions on political issues another I pay attention and follow as best I can. But I avoid it because people seem ready to pounce on you when your say something against their own personal train of thought. Yesterday and today that happened once I shared my thoughts on the debate. Here is a look: 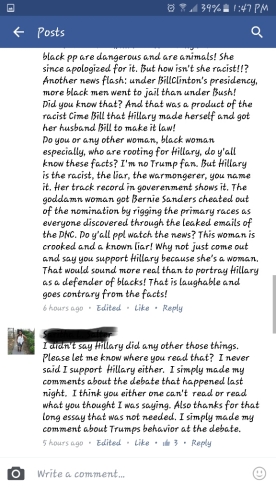 Now the guy that commented, I like him. I was completely caught off guard by his comment. I admit I got a little too much in my feelings, but I hate when people assuming something about whatever it is I post. I would’ve rather he asked me what exactly did I mean, but as you can see I got a whole essay. LOL. I don’t like Hillary Clinton, but I was simply commenting on what I thought  of this particular debate. Hillary is no saint, nor do I regard her as one. But Trump’s behavior and comments where on showcase yesterday and I don’t understand how people can say they are voting for him, especially after that.

At any rate, I say if we don’t agree with other we can voice our opinions. But we have to learn to agree to disagree. Myself included.

2 thoughts on “Agree to Disagree”